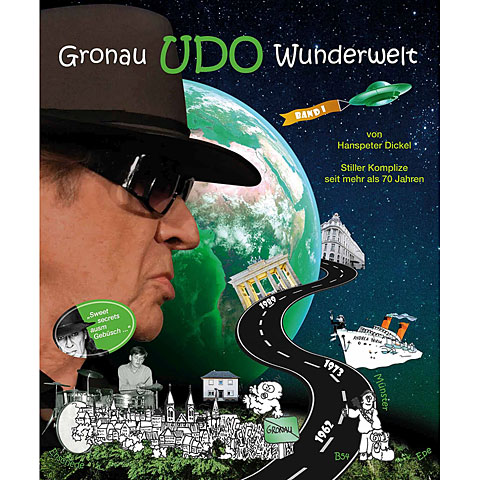 Silent accomplice for more than 70 years!

The editor and main author has been a friend of Udo Lindenberg since childhood and has witnessed the development of his work closely over the years. On the one hand naturally in his childhood and youth, on the other hand also after Udo's "personal turn" in 1973.

"Only apparent turning away... devotion... affection... Connectedness, yes love to our common hometown Gronau in Westphalia, where he has often performed in the meantime and which has honoured him many times. "

Udo's homeland ties:
The concrete reference to Gronau is in the foreground of this publication, but there is also room for the "all around".

The "spoken word" of Udo and the most important participants during the many exhibitions, honours, openings, concerts and press conferences can be read in the volumes.

B]Structure of contents:
The content is structured chronologically and arranged by decades.
A loose mixture of illustrations, documents, caricatures, photos and texts.
Most of the material is previously unpublished.
Rounded off by a detailed list of sources.

About the team of authors:
An authorship of 36 people helped with the lovingly compiled chronicle and revealed personal experiences and anecdotes. (Among them are fans, friends, teachers, caricaturists, painters, schoolmates, fellow players, comrades-in-arms, neighbours, officials, panicologists, companions)

Conclusion:
So: Broaden your horizon - preferably already during your lifetime!
more
less

5 stars (1)
4 stars (0)
3 stars (0)
2 stars (0)
1 star (0)
Average customer rating:
(1 Rating)
5.0 out of 5 stars
This item was given an average rating of 5.0 out of 5 stars. No review about this product has been written yet. 1 rating exist without a text or the review is written in another language.
more
less
incl. VAT, plus delivery costs
In stock
Available for immediate delivery
Add to basket
Add to wish list
10118410
Item number:
11/2019
Available since:
› Print view
Share
Facebook
Twitter
Pinterest
E-Mail
Advice & Support