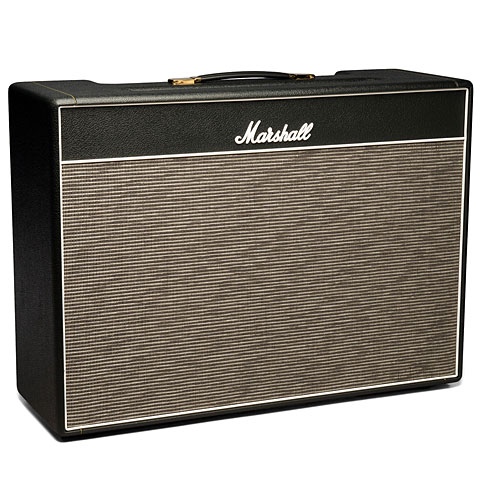 After the huge success of the JTM45 amplifier, a 2x12" combo version was released to satisfy popular demand and the now legendary 1962 Combo was born. Again the valve rectification, pioneered by Marshall in the early 1960s, was responsible for helping to achieve the famed output stage compression and sustain exhibited uniquely by both the JTM45 and 1962.
Though tonally similar to a JTM45, the 1962 combo is loaded with two re-issue Celestion ´Greenback´ 25 Watt speakers to re-create that classic sixties tone. The 1962 ´Bluesbreaker´ Combo also comes with the addition of a footswitchable Tremolo effect.
The 1962 received its more familiar nick name, the ´Bluesbreaker´, after Eric Clapton used one with John Mayall´s Bluesbreakers to record their highly influential ´Beano´ album.
Here was one of the earliest and finest examples of a guitarist using the natural tone and overdrive of an amplifier to help form a fundamental ingredient in his own overall sound.
So if you´re looking for that sensuous, creamy early Clapton sound, Marshall guarantees that you´ll find it in this beautifully re-issued combo.

The Marshall re-issue range consists of the 100 Watt JCM800 2203, 100 Watt 1959SLP head, the 50 Watt 1987X head, the 2245 (JTM45) head and 1962 ´Bluesbreaker´ combo. All are faithful reproductions of the originals, which shaped the sound of the electric guitar as we know it.
The main characteristic that these amps share is their simplicity of operation and superb natural valve tone. Achieving the beautifully organic and vibrant overdrive which is their trademark, can only be done in one way - crank ´em up! The result is pure, majestic tone uncluttered by unnecessary circuitry. With solos this produces a big, round, warm, sustain, full of classic character. With chord work you get a bark and percussive attack with a natural sounding break up, which allows each note to ring out in a glorious musical crunch.
meer
minder