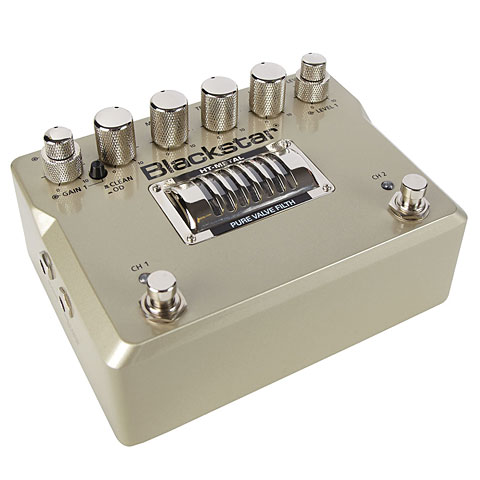 Plug into the Blackstar HT-Metal distortion pedal for high-gain tube tone that's also incredibly responsive. The secret of the HT-Metal's high-gain is a series of cascaded tube gain stages that go from subtly overdriven tones all the way to metal. Operating at 300 volts means the Blackstar HT-Metal pedal has headroom and responds very dynamically to your playing. With Blackstar's patented ISF Infinite Shape Feature for tone shaping, silent switching between channels, and the speaker-emulated direct output, and the HT-Metal is a seriously flexible front end for your guitar.

The Blackstar HT-Metal pedal uses real tube gain stages, cascaded to give the feel and response of a real tube amplifier. It's got two channels, each with their own gain controls, so you can set up complementary tones easily. And because it works at 300V, it's got the headroom to capture the dynamics and nuances of your playing.

ISF lets you alter the character between a British flavor and an American flavor. In addition, you get a three-band EQ for more traditional tone shaping.

The HT-Metal pedal has a speaker-emulated output for direct recording or connecting directly to a sound system. With powerful gain stages and tone shaping features, the HT-Metal is really more like a high-gain preamplifier for your guitar, a solid front end for recording direct, especially in situations when you simply can't put a microphone in front of a fully-cranked metal stack. 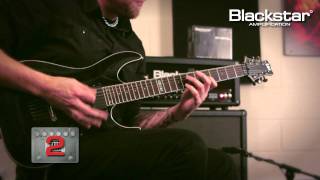