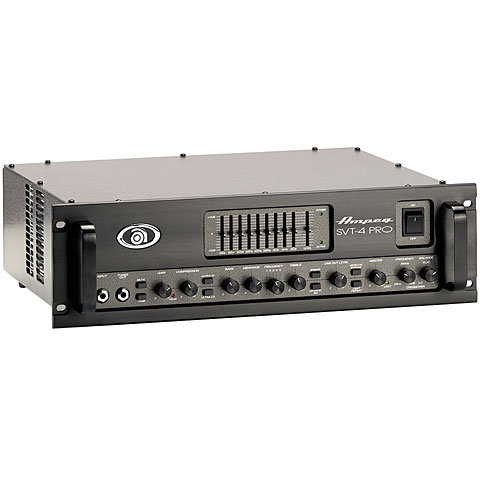 The sound is in your head. You´ve played countless instruments in search of the ultimate soul mate. Now you need an amp that will project your sound to the audience. That´s where the Pro Series heads come in. The majority of Ampeg Pro Series heads feature multi-tube preamps (not a single 12AX7 like many competitors), 5-position mid frequency selection, and Neutrik Speak-On connectors that lock and provide better conductivity. A Mute button lets you change instruments in the middle of a set without the annoying "pop," and a Tuner Out jack that stays active even with Mute button on. Pro Series heads are built for long haul. The units remain cool with variable speed fans that turn as the temperature dictates. DC supplied filaments ensure noise-free tube performance. And the 1/8 in. thick extruded aluminum front panels not only allow safe racking, the contoured fronts have an awesome look. The 1200-watt SVT-4PRO is the industry´s highest powered bass amp. Your creative mind now has the products to deliver the goods.