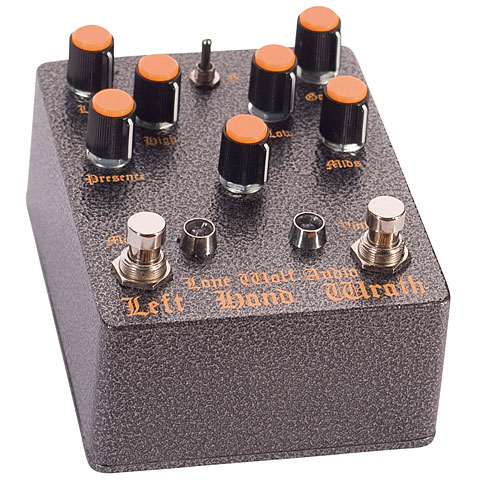 The Lone Wolf Audio LeftHand Wrath is Joe Anastasio`s interpretation of one of the most sought after pedals from the 80's the HM-2. The HM-2 was the first real Metal Distortion pedal effect on the market, in the early 90s Swedish bands like Dismember and Nihilist (later Entombed) created their legendary "Buzzsaw" sound with this pedal.

The LeftHand Wrath is a high-end version of the HM-2s with some modifications and improvements. Also added is a center controller that operates in the high middle range and can control the bruzzeligen high mid portions independently from the treble. With the Vintage / Modern footswitch, an additional presence control can be added which provides an extra boost to "Top End". The character of the distortion can be changed with a 3 fold Clipping switch - choose from the original Japanese Vintage diodes sound of the original, no diodes in the signal or a pair of Vintage Germanium diodes for a softer, but still-present basic sound. Perimeter noises are held to a minimum thanks to the high quality, selected components even at "full throttle" setting limits.
more
less

5 stars (1)
4 stars (0)
3 stars (0)
2 stars (0)
1 stars (0)
Average customer rating:
(1 Rating)
5.0 out of 5 stars
This item was given an average rating of 5.0 out of 5 stars. No review about this product has been written yet. 1 rating exist without a text or the review is written in another language.
more
less
incl. Taxes and Customs duties, free delivery
Add to basket
Add to wish list
In stock
Available for immediate delivery
10080684
Item number:
08/2015
Available since:
› Print view
Share
Facebook
Twitter
Pinterest
E-Mail
Advice & Support