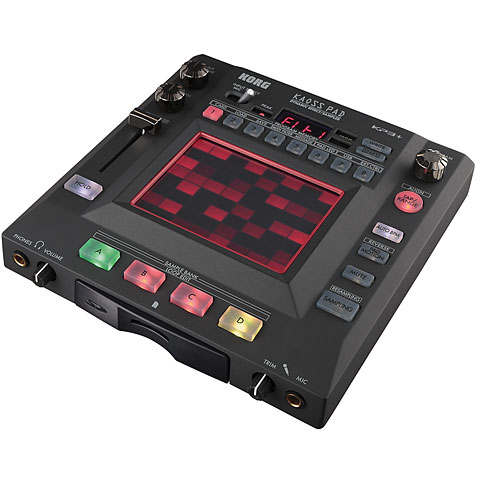 There are an extra 28 effects programs added to the KP3, for a total of 128 effects programs, including the usual suspects reverbs, flangers and delays as well as some unusual presets like decimator, tone-bender and grain shifter. Drum loops, RADIAS-inspired synth sounds and vocoder presets can be controlled via the X/Y pad.

4 front panel Sample Bank buttons control the creeation, playing and saving of looped and one-shot samples at 16-bit/48-kHz via 24-bit converters. Samples can be saved to SD Secure Digital card permitting on-board memory capacitiy of up to 100 16-bit/44.1kHz samples, or can be transfered to/from a computer using the KP3 rear panel USB connection. Included with the Korg Kaoss Pad is a software bundle containing and audio editor and a sample librarian. The software also allows WAV and AIFF files to be loaded into the KP3 Kaoss Pad, with pitch correction for samples not created at 48-kHz.

Audio can be recorded onto the Korg KAOSS Pad KP3 using the RCA stereo line input or via a 1/4" mic input with dedicaated Trim control. The front panel contains a Headphone output with dedicated Volume pot. The Kaoss stereo inputs and outputs can be set to run in-line ov in a loop from a mixer.

The KAOSS KP3 has a single MIDI In/Out for 16 MIDI channels with a MIDI controller, sending out three controller numbers from the touchpad additional messages from the slider. Sample Bank buttons send and receive note messages, Program Change commands and clock info can also be sent and received.

The Korg KP3 Kaoss Pad Dynamic Effects Sampler has been used by DJs, musicians and producers. No other interface is as intuitive, immediate or fun to use. By simply touching, tapping or sliding your finger over the touchpad, the Korg Kaoss KP3 allows you to control multiple effects parameters and manipulate samples in real time.

5 stars (12)
4 stars (5)
3 stars (0)
2 stars (0)
1 stars (0)
Average customer rating:
(17 Ratings)
4.7 out of 5 stars
This item was given an average rating of 4.7 out of 5 stars. No review about this product has been written yet. 17 ratings exist without a text or these reviews are written in another language.
more
less
incl. Taxes and Customs duties, free delivery
Delivery time on request
This item is currently not available. The delivery time has to be asked individually.
Add to basket
Add to wish list
10066405
Item number:
01/2013
Available since:
04959112103290
GTIN:
› Print view
Share
Facebook
Twitter
Pinterest
E-Mail
Advice & Support