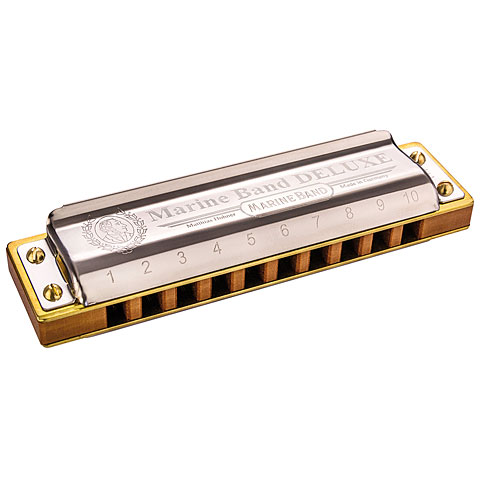 Hohner Marine Band Deluxe
When the Marine Band was introduced to the American market in 1896, no one could guess what lasting influence this instrument would have on the future of pop music. The low price and small size made the Marine Band a popular travel companion. The unique, almost plaintive sound of overblowing opened up a whole new world of creative expression.

That was the cornerstone of the Marine Band series, which has become a key figure and unleashes the raw emotion of the blues, the free spirit of country and the energy of rock'n'roll like no other. From the classic 1896 to the modern crossover, the Marine Band series offers genre-harmonicas that are still to this day the first choice of countless harmonica players around the world. All Marine Band models are made in Germany.

Thanks to the completely bolted construction, the Marine Band Deluxe is particularly easy to care for.
The improved lids with side openings and an open back give the harmonica more volume and stability. In addition, the Deluxe has a high playing comfort due to the rounded voice plates and channel openings and the two-fold painted pulpit body ensures a reduced swelling behavior and makes the Marine Band Deluxe particularly robust. The mouthpiece of the harp is additionally sealed with a layer of UltraGlide
A sturdy zippered case that lets moisture escape and protects against dust and dirt completes the Marine Band Deluxe.
more
less 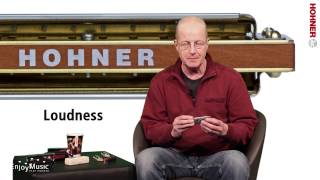 Find similar products:
· Hohner Diatonic Harmonicas
· More products of the series Hohner Marine Band Deluxe
· Show all articles of the brand Hohner.
· Wind Instruments
· Harmonicas
· Trumpets
· Trombones
· Euphonium
· Tenor/baritone horns
· French Horns
· Tubas
· Saxophones
· Clarinets
· Flutes
· Magic Flutes
In order to give you a better user experience, we use cookies. By visiting, you agree to the use of cookies.