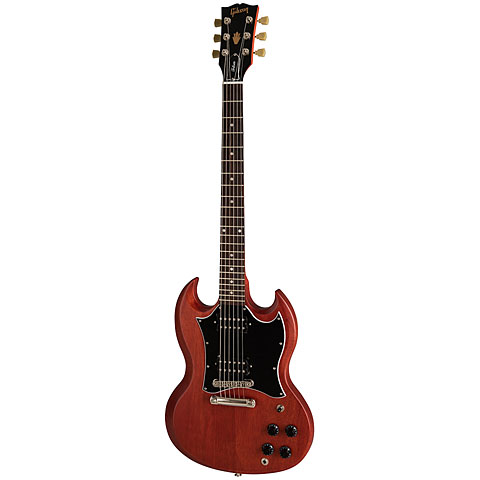 Gibson SG Tribute
In 1961 Gibson radically changed the shape of their Les Paul models. The body became lighter and thinner, and got a sharp double cutaway. The name of this new "Les Paul" was later changed to SG (for Solid Guitar) and it became the trademark of Rock 'n' Roll in the 1960s. Although the original single cut Les Pauls returned years later, the SG had built up a large fan base and up to this day, this unique design has been able to retain its place on the big stages of Rock'n'Roll.
more
less

5 stars (1)
4 stars (0)
3 stars (0)
2 stars (0)
1 stars (0)
Average customer rating:
(1 Rating)
5.0 out of 5 stars
This item was given an average rating of 5.0 out of 5 stars. No review about this product has been written yet. 1 rating exist without a text or the review is written in another language.
more
less
incl. VAT, free delivery
Add to wish list
In stock
Available immediately
10114175
Item number:
05/2019
Available since:
› Print view
Share
Facebook
Twitter
Pinterest
E-Mail
Advice & Support