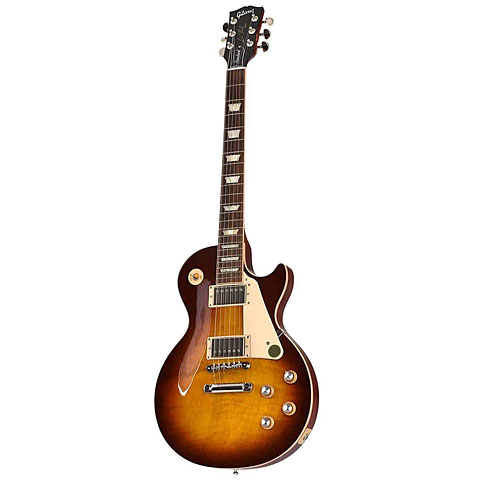 With the Les Paul Standard '60s, Gibson USA is finally offering a no-nonsense Les Paul in a classic design and look. You won't find any weight reliefs and push / pull pots here

Gibson Les Paul Standard
The Les Paul Standard is undoubtedly the biggest hit in Gibson's history - a true guitar icon with a legendary reputation. The guitar was developed in collaboration between Les Paul and a team headed by Gibson President Ted McCarty and officially introduced in 1952. Throughout history, several detail improvements have been introduced - the original construction - mahogany body with curved maple top and glued-on mahogany/rosewood neck have been retained. Still one of the most successful guitar designs of all times.
more
less

5 stars (6)
4 stars (4)
3 stars (0)
2 stars (0)
1 stars (0)
Average customer rating:
(10 Ratings)
4.6 out of 5 stars
This item was given an average rating of 4.6 out of 5 stars. No review about this product has been written yet. 10 ratings exist without a text or these reviews are written in another language.
more
less
incl. VAT, free delivery
Add to wish list
In stock
Available immediately
10113935
Item number:
04/2019
Available since:
› Print view
Share
Facebook
Twitter
Pinterest
E-Mail
Advice & Support