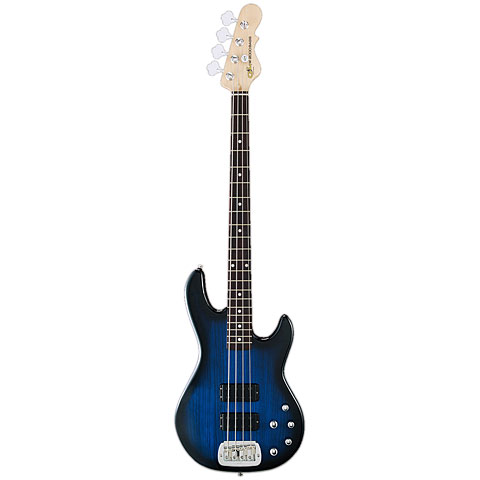 The G&L M series is the successful continuation of the L series.

The M series is now equipped with 3 band electronics. A major innovation is the use of an aperture control instead of the selector switch.
The electronics are fed with 18V, which promises a large headroom with a lot of dynamics.
The MFD humbuckers have been further developed by Paul Gagon and offer a large, fat tone with crisp highs.
Regardless of whether it's slapped, picked or played with a pick, the M-Series is assertive and gives the band the necessary foundation.

G&L remembers its roots with the M-series and designed the neck in the classic C-profile (1 5/8 "), which was dropped in the 80s.
The neck wants to be held firmly, but also offers a tight and stable tone with a long sustain.

G&L Tribute
After Leo Fender left "MusicMan" , he founded the company G&L with George Fullerton as partner in 1980. The Company intended to make the world best electric guitars and basses. The company name is made up from the initial letters of both the company founders and read "George & Leo".
After Fullerton left the company in later years, Leo Fender changed the name to "Guitars by Leo".
After Leo Fender died in 1991, his wife decided to give the directorship to a company called "BBE Sound" under the leadership of John C.Mclaren.
Years before, Leo Fender had already negotiated with John Mclaren and was sure, that he would carry on with G&L as Fender would have done himself.The agreements also include, that George Fullerton has a constant position as an advisor and that his wife, Phyliss Fender, holds a position as a chief executive officer in the company, so that Leo Fenders integrity and spirit would stay as a reminder to the company.

Nowadays G&L carry on the produkion as Leo Fender himself would have done. Leo´s workplace, the epicenter of his creativity, was left as Leo had left it on his last day of work. His workplace has somewhat become a pilgrimage destination for people in the music business from all over the world.
The employees of G&L, his "family", still build his instruments with love, commitment and lots of skill. To emphasize G&L´s uniqueness and Leo Fenders philosophy, John Mclaren once said: "G&L will always be ready for changes. Leo Fender was always a symbol of change and evolution to the advantage of the musician. Prior to every intended change, we will always ask ourselfs "is this what Leo would have wanted?" If yes we will make the change, if not, we won´t. We always want the feeling, that Leo Fender would be proud of G&L today.
more
less

5 stars (1)
4 stars (0)
3 stars (0)
2 stars (0)
1 stars (0)
Average customer rating:
(1 Rating)
5.0 out of 5 stars
This item was given an average rating of 5.0 out of 5 stars. No review about this product has been written yet. 1 rating exist without a text or the review is written in another language.
more
less
incl. VAT, free delivery
Add to wish list
In stock
Available immediately
Delivery return
minimal traces of use, original packing
10113169
Item number:
03/2019
Available since:
› Print view
Share
Facebook
Twitter
Pinterest
E-Mail
Advice & Support