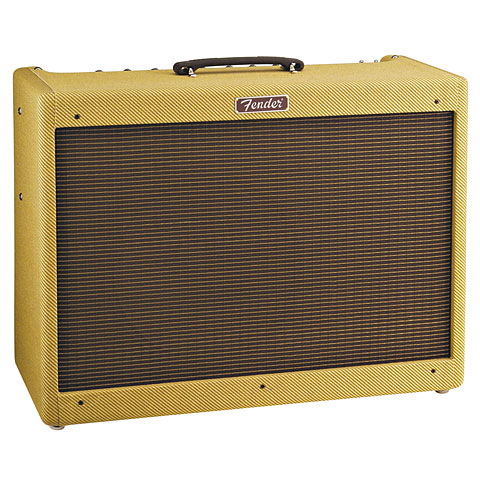 In 1993, Fender® released the “Tweed” series amps to great success and acclaim. The concept: what if a great old collectable 1950s Deluxe or Bassman® was customized with channel switching and Reverb? The Blues Deluxe and Blues DeVille were launched as vintage-styled tube amps with “boutique” tone at mass-produced prices, and many pro players in the rock, country, and blues fields used them with great results.

Great amp and great vintage sound, I play a telecaster with it, I like the sound of both channels specially its crunch sound It remembers the sound of the 60' & 70' I am very happy with it I recommend it 100%

I like the sound !
Very nice amp, with vintage sound & sustain with all my guitars
( Gretsch 6120W, Fender Tele 62, Strat 56 CS and Gibson LP Antique Deluxe )...
Great reverb, smooth & warm to hot, great drive but better with TS9 or TS808 ! + nice vintage tweed aspect !
If you play Country to Blues, Rockabilly to Pop Rock , this awesome amp is made for you !
Careful it is powerful!!! If you want to use it at home (maybe you'll need a power break or volume box).

This item was given an average rating of 4.8 out of 5 stars. In total, 2 reviews were submitted. The comments are not the opinion of Musik Produktiv, they are the subjective opinions of our customers. 23 ratings exist without a text or these reviews are written in another language.
more
less
incl. Taxes and Customs duties, free delivery
In stock
Available for immediate delivery
Add to basket
Add to wish list
100021558
Item number:
04/2005
Available since:
Fender
Brand:
223-2206-000
MPN:
00717669310035
GTIN:
› Print view
Share
Facebook
Twitter
Pinterest
E-Mail
Advice & Support