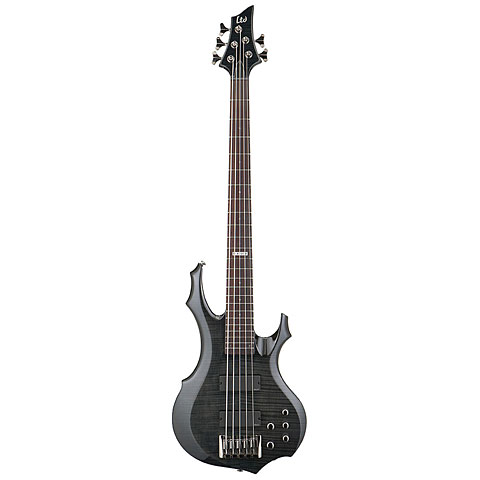 Hardly any manufacturer of electric guitars is so closely associated with hard rock and heavy metal as ESP and hardly any other manufacturer has penetrated this market as brutally as ESP in recent years. Since the company was founded in 1975, when it only produced spare parts for electric guitars and the start of the production of its own guitars in 1983 until now, ESP has always been on the cutting edge. The breakthrough came in 1989 when ESP launched the first signature models for both George Lynch and Kirk Hammett. Since then, the list of endorsers has grown and ESP created the LTD brand in 1996, under whose names cheaper and slimmer versions of most ESP models are produced in Korea and Indonesia. Today ESP / LTD occupies one of the top spots in the genre Hard 'n Heavy Guitars.

ESP LTD F Series
The ESP/LTD self designed F-Series doesn´t just look like a Metal Guitar but it sounds like one as well, if you turn up at a gig with an F-series, there is no doubt to what type of music is going to be played!

The Korean copies of the expensive ESP guitars are built with the same care and technical know how as the signiture or standard series from the japanese noble brand LTD by ESP.
Since the founding of the company in 1975 by Hisatake Shibuya, ESP have become a renowned manufacture of high-end guitars and basses. The list of worldwide ESP endorsers is also impressive. Bands such as Metallica, Rolling Stones, Rammstein, Sepultura oder Children of Bodom are just a few who are role models for many musicians.
more
less

5 stars (3)
4 stars (1)
3 stars (0)
2 stars (0)
1 stars (0)
Average customer rating:
(4 Ratings)
4.8 out of 5 stars
This item was given an average rating of 4.8 out of 5 stars. No review about this product has been written yet. 4 ratings exist without a text or these reviews are written in another language.
more
less
incl. VAT, plus delivery costs (Bulky goods)
Add to wish list
In stock
Available immediately
Bulky goods
This item is shipped by freight carrier. Further information
100044731
Item number:
06/2007
Available since:
› Print view
Share
Facebook
Twitter
Pinterest
E-Mail
Advice & Support