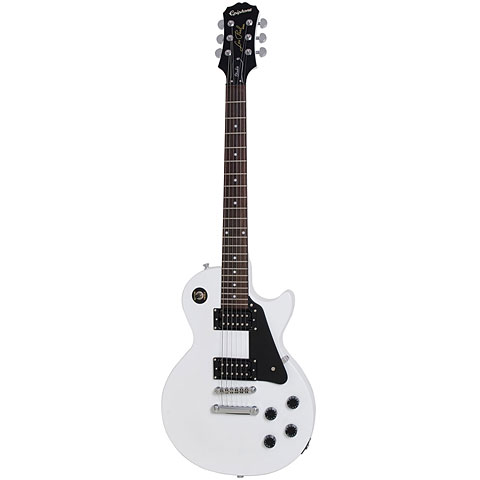 Epiphone have been in the business for 125 years now. Epaminondas Stathopoulos is the founder and namesake of Epiphone. He has already obtained his first patent when he was only 24 years old. The history of Epiphone has also been shaped greatly by the brilliant guitarist Les Paul experimenting in the Epiphone factory to design the first solid body electric guitar in 1941. Today Epiphone stand for both innovative guitar design and for excellent yet affordable replicas of true guitar classics.

Epiphone LP Studio
The Epiphone LP Studio is the less costly counterpart to the Gibson Les Paul Studio. The Studio is a guitar with no frills. The use of Binding and trapeze inlays has purposely been left out on this model and the guitar is reduced to the essentials.
more
less

5 stars (11)
4 stars (2)
3 stars (1)
2 stars (0)
1 stars (0)
Average customer rating:
(14 Ratings)
4.7 out of 5 stars
This item was given an average rating of 4.7 out of 5 stars. No review about this product has been written yet. 14 ratings exist without a text or these reviews are written in another language.
more
less
incl. VAT, free delivery
Add to wish list
In stock
Available immediately
10058844
Item number:
02/2012
Available since:
› Print view
Share
Facebook
Twitter
Pinterest
E-Mail
Advice & Support