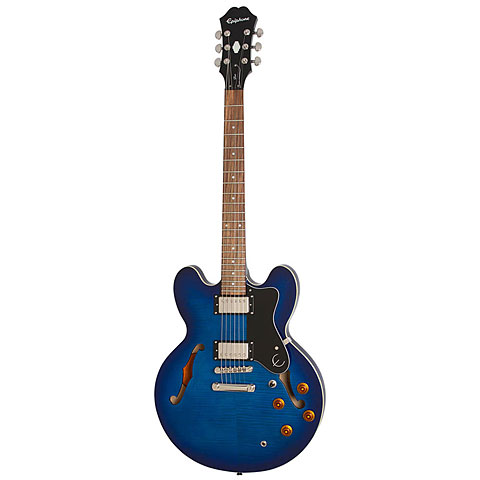 Jazz Collection
Epiphone launched their first jazz guitars in 1931 and soon became established as serious competition for Gibson. The marketing expert Epi Stathopoulo gave each instrument a name instead of a straightforward model number in order to ensure that these high-quality instruments get the image they deserve right from the beginning. Epi invented the name "Masterbilt Series" for this group of guitars in order to attract attention and to set himself apart from his competitors, who were more focused on tradition.

Thinline
Epiphone perfectly accentuate their strengths with the Thinline Series, which includes a wide range of models with different features in all price ranges. The models “John Lennon Casino” and John Lee Hooker” are the most popular Thinline Series Models.

When Gibson launched the ES-335 in 1958, it was huge success. It´s a blend of a hollowbody and a solidbody guitar and that´s its hallmark. The body of the ES-335 has a solid centre sustain block, while the resonance body is limited to two hollow side wings. The advantage of this design should be obvious: The risk of feedback in connection with high volumes is reduced significantly. The ES-335 has a double cutaway design, which was also known as “Mickey Mouse Ears” to improve playability. Today the ES-335 is established as a true classic and Epiphone have a range of interesting model options to offer.

5 stars (17)
4 stars (17)
3 stars (0)
2 stars (0)
1 star (1)
Average customer rating:
(35 Ratings)
4.4 out of 5 stars
This item was given an average rating of 4.4 out of 5 stars. No review about this product has been written yet. 35 ratings exist without a text or these reviews are written in another language.
more
less
incl. Taxes and Customs duties, free delivery
Delivery time on request
This item is currently not available. The delivery time has to be asked individually.
Add to basket
Add to wish list
10119893
Item number:
01/2020
Available since:
Epiphone
Brand:
ES-335
MPN:
00711106480077
GTIN:
› Print view
Share
Facebook
Twitter
Pinterest
E-Mail
Advice & Support