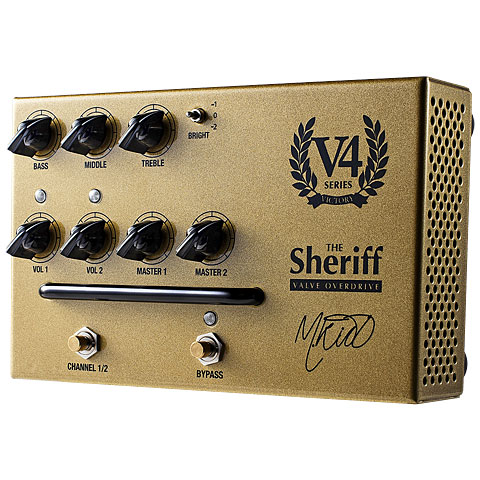 The British amp manufacturer has released three of its bestselling amps as amp in a box or preamp. All pedals work with a real tube circuit - Victory uses an EC900 triode and 3 CV4014 pentodes - very unique tubes, a convincing sound, and a long life. The preamps in sequence:
The Sheriff Pedal corresponds to the successful Sheriff Amp, a British classic rock top with a characteristic sound and a lot of pressure. There are 2 channels available, which share a common 3-band tone control and a bright switch, as well as separate gain and master controls per channel. The highlight of the Victory preamps is that they can either be integrated as a standard ballast or, which is much more interesting, in an amp with a DX loop. The preamp of the amp or the Sheriff pedal can be used as an alternative. Other effects pedals that are in the effects loop can still be used. The remote switch input of the pedal is very useful here, as it can be operated remotely via an external foot switch or switcher. The sound of the Sheriff Pedal is as you'd expect: all shades of classic British rock board - from JTM to Plexi to Hot Rodded JCM 800.

Victory V4 Series
Victory has squeezed 3 of its most popular amps, the Sheriff, the V30 and the Kraken, into a handy tube preamp pedal. The 2 channel pedals work with a real tube circuit, equipped with miniature tubes. The V4 pedals can be used either as ballast unit or embedded in a serial FX loop of an amp.
more
less 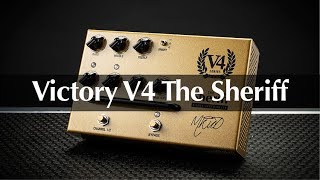