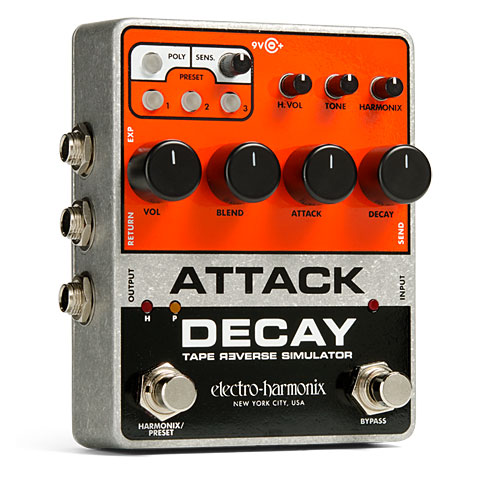 It is back, and also significantly improved: Electron Harmonix has re-launched the Attack Decay Pedal and brought it up to the current state of the art. What is this mysterious thing actually doing? The pedal processes the envelope of the signal, similar to the legendary Boss SG-1 Slow Gear - swelling "violin bow" sounds are the profession of the Attack Decay Pedal. Depending on the playing style, interesting swell sounds can be generated, which can also be sent through the integrated fuzz circuit if necessary. In contrast to the original version, the current Attack Decay also works via a polyphonic mode, with which chords can also be edited. External FX pedals can be integrated into the Attack Decay via the FX Loop.
more
less

5 stars (5)
4 stars (1)
3 stars (0)
2 stars (0)
1 stars (0)
Average customer rating:
(6 Ratings)
4.8 out of 5 stars
This item was given an average rating of 4.8 out of 5 stars. No review about this product has been written yet. 6 ratings exist without a text or these reviews are written in another language.
more
less
incl. VAT, plus delivery costs
Add to basket
Add to wish list
In stock
Available immediately
Delivery return
minimal traces of use, original packing, manual missing
10124723
Item number:
09/2020
Available since:
› Print view
Share
Facebook
Twitter
Pinterest
E-Mail
Product Video 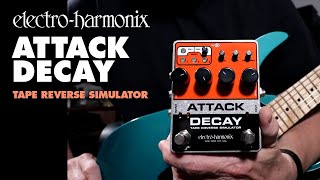