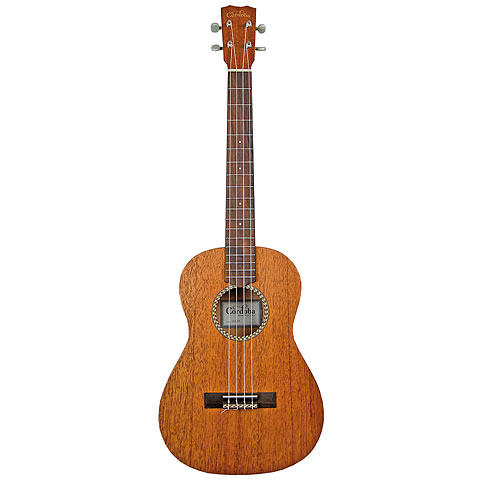 I got the uke in good order. Thanks for the good service. As far as the uke itself is concerned, there's a lot to be said for that. Of course, the cost of the instrument (199 euros) is quite low. That's probably why the final finishing - a matter of manual labour - has been neglected. The sound box is of a good quality and gives a deep and loud projection. Furthermore, I had to adjust just about everything myself. The tuning keys were so miserable that I ordered Grover keys to replace them. The ends of the frets were sharp and had to be filed. The saddle and the nut were too high and had to be corrected. Also the position of the fretboard is a bit convex, so at some positions a light fret buzz occurs. A truss rod in two directions would have been useful here.
As the uke now sounds and can be played it is okay. But I wouldn't buy it again or recommend it to anyone.

This item was given an average rating of 3.0 out of 5 stars. 1 review has been written. The comments are not the opinion of Musik Produktiv, they are the subjective opinions of our customers.
more
less
incl. VAT, free delivery
Add to basket
Add to wish list
In stock
Available immediately
10109894
Item number:
11/2018
Available since:
Cordoba
Brand:
20BM
MPN:
00809870039437
GTIN:
› Print view
Share
Facebook
Twitter
Pinterest
E-Mail
Advice & Support