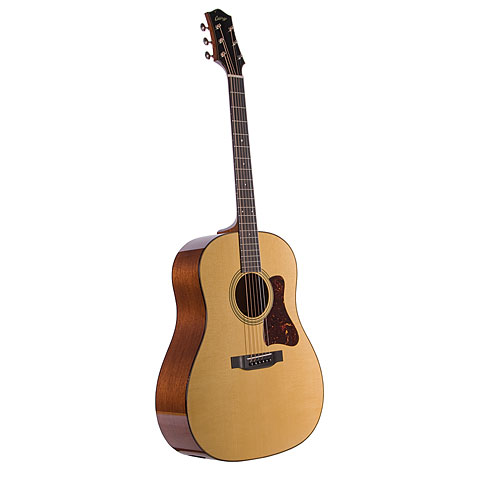 The Collings Jumbo, or CJ, is their version of the classic slope-shouldered dreadnought, a shape that has enjoyed renewed popularity in recent years. While the CJ is similar in width and depth to the traditional dreadnought, it has a distinctly different tone. Despite its large size this model works well with the optional shorter string scale, resulting in a somewhat percussive bottom end ideal for acoustic blues or other styles that benefit from a more controlled bass response. Of all the Collings body shapes, this is the one most often requested with a sunburst top finish, and the wide range of wood options, neck widths, and string scales allow the CJ to be many different guitars to a wide variety of players.

Collings
Bill Collings moved from Ohio to Houston, Texas in the mid-1970s. More interested in guitars and engineering than in medical school, he took a job at a machine shop and began building guitars on his kitchen table with just a few hand tools. Before long his instruments were in the hands of local talents Rick Gordon and Lyle Lovett, which led more Texas players to seek out Bill for custom guitars. After building about fifty guitars and a few banjos in Houston, he headed west to pursue lutherie in southern California. Along the way, he befriended Austin luthiers Tom Ellis and Mike Stevens. Having found like-minded instrument makers, Bill decided to stay and share space in Tom’s shop. By the mid-1980s, Bill was building flattop and archtop acoustic guitars in his own small shop. His reputation for outstanding quality and meticulous attention to detail quickly spread. In 1989, he rented a 1,000-square-foot space and hired two helpers.
In the spring of 1992, Bill moved his guitar-making operation into a 3,200-square-foot feed store he purchased on the outskirts of Austin. By this time musicians such as Pete Townshend, Joni Mitchell and Brian May were playing Collings instruments and demand continued to grow. By 2005, Bill broke ground for a new 27,000-square-foot shop featuring CNC technology that modernized machining processes and made parts production more consistent, accurate and safe. As the business grew and processes were refined, one thing remained the same: Bill Collings’ commitment to build the finest stringed instruments available.
Fueled by his fascination with the construction and design of a variety of instruments, Bill soon began crafting more than just acoustic guitars.
For the past 30 years, Collings Guitars have been the choice of musicians who seek the finest handmade instruments available. You owe it to yourself to try a Collings.
more
less

This item was given an average rating of 5.0 out of 5 stars. 1 review has been written. The comments are not the opinion of Musik Produktiv, they are the subjective opinions of our customers. 1 rating exist without a text or the review is written in another language.
more
less
incl. VAT, free delivery
Add to basket
Add to wish list
In stock
Available immediately
10061121
Item number:
05/2012
Available since:
› Print view
Share
Facebook
Twitter
Pinterest
E-Mail
Advice & Support