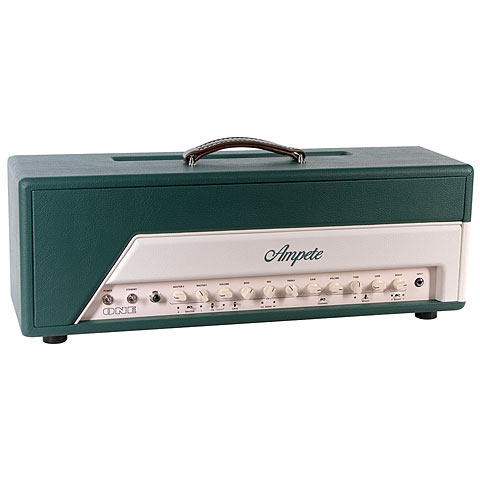 The Ampete One is a true sound miracle. The German produced Amp comes with a rather simple, clear layout and surprises with an extreme variety of sounds. Peter Arends has really managed to cover all the sound worlds with just a few buttons and in a relatively simple 2-channel design where other manufacturers need a variety of channels and lots of buttons. The unique Boost concept and the sheer sound quality let this amp play in the top league. Definitely worth the money!
The core of Ampete ONE is a 2 channel concept, Channel 1 covers the American side and channel 2 the British side of the amplifier design story. Ampete's second channel can additionally be in the LO and HI mode drive, The LO Mode enfolds, with its Plexi DNA, a very open sound, fast attack and pure dynamics. The HI Mode offers a dense distortion with balanced sound for rhythm and lead sounds.
If you are counting we already have three sounds.
The unique design of the Ampete ONE's boost drives it then to the extreme. Boost 1 is designed as a treble boost, in which a part of the deep bass are cut off and a few trebles are bled in. This gives the sound a nice freshness and assertiveness. The intensity of the gain boost is naturally regulated. Boost 2 is designed as a full-range boost and simply offset the chosen basic sound. Both boosts can be used both individually and in combination. Thus, for each basic sound 4 possible gain levels and timbres.
With 3 basic sounds, and 4 Gain stages / timbres we have twelve sounds ready to be called up from the footswitch which incidentally is included. Here we must say at this point that these sounds are extremely well matched and you never get the feeling that you need to adjust in some way. Even the combination of both boosts is matched exactly to one another, giving the clean channel already stunning sounds of its own. Lead channel combining boosts elicits the Ampete ONE incredible gain reserves, the sounds do not even get muddy with a Les Paul in neck position - on the contrary, both single notes and chords always sound clean.
In the sound quality and the possibilities offered by the Ampete ONE, one tends to forget some important features and innovations. The ONE has 2 master volumes and the FX Loop can be controlled via footswitch and via midi.
The FX Loop also provides a function that we unfortunately never see with any other manufacturer. The FX loop has a so-called spillover, delays or reverbs can finish off decaying after you disable the FX Loop.
more
less

5 stars (2)
4 stars (0)
3 stars (0)
2 stars (0)
1 stars (0)
Average customer rating:
(2 Ratings)
5.0 out of 5 stars
This item was given an average rating of 5.0 out of 5 stars. No review about this product has been written yet. 2 ratings exist without a text or these reviews are written in another language.
more
less
incl. VAT, free delivery
Add to basket
Add to wish list
In stock
Available immediately
Delivery return
minimal traces of use, original packing, Signs of use on the equipment, technically checked and 1A, cardboard no longer beautiful
10090975
Item number:
11/2016
Available since:
› Print view
Share
Facebook
Twitter
Pinterest
E-Mail
Product Video