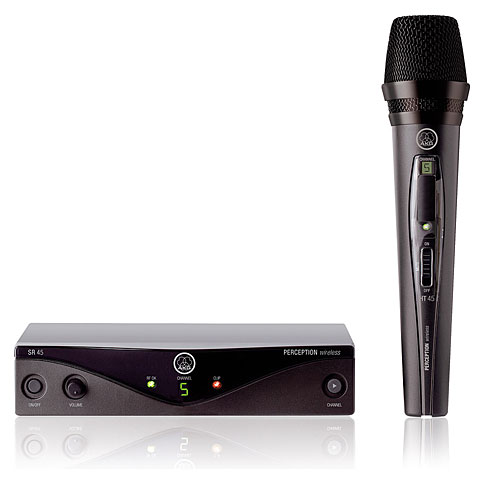 The AKG Perception PW 45 Vocal Set is ideal for vocals and speech. It consists of the SR 45 receiver and the transmitter HT 45

The diversity receiver SR 45 guarantees safe transfer of the audio signal through the two Antennae. The reception quality of the two antennae is compared constantly using sophisticated algorithms and uses only the strongest received radio signal. This guarantees optimum sound quality with no dropouts.

The HT 45 transmitter has a display showing the transmission channel and an indicator LED for the battery status. With only one AA battery, the system runs up to 8 hours. On Gain switch the sensitivity of the audio signal is adjusted in two stages. In addition, the transmitter has a noiseless on / off / mute switch.

The capsule in the transmitter has a cardioid polar pattern. The microphone is especially insensitive to handling noise, safe against feedback and ensures the right voice cut through. An internal windscreen effectively suppresses pop and wind noise.

Both the SR 45 receiver and the HT 45 transmitter operate in a switching bandwidth of up to 30 MHz in the UHF carrier frequency range from 500 MHz to 865 MHz. Selectable are up to 8 different carrier frequencies.

Supplied with a power adapter, a stand adapter and one AA battery included.
more
less