The Boss RE20 Space Echo recreates every sonic detail and nuance of the Roland Space Echo RE-201!

The original Roland RE-201 Space Echo debuted in 1973, and is one of the most sought-after vintage effects of all time. Known for warm, saturated tape sound with expressive hands-on control, the Space Echo is legendary. Experience the legendary tape-echo sound of the RE-201, and get "lost in space" with the RE-20 from Boss. The Mode Selector chooses one of twelve different reverb and echo effects based on emulations of various combinations of RE-201's three playback heads and reverb.

The Roland Space Echo RE-201 tape echo appeared in 1974. Even though the Space Echo is no longer in production, it remains a world-famous device known for chorus effects created by the subtle wavering movement of a recording tape across the heads, and for the characteristic compressed sound that results from magnetic saturation of the tape.

What was so special about the Roland RE201 tape echo emulated by the Boss RE20 Twin Pedal guitar effects pedal ? Tape compresses and distorts the signal in a musical way that creates the impression the echos are disappearing in the distance, rather than just getting softer, making a realistic and warm echo effect that is not to be found in any transistor based echo unit. The Boss RE20 Twin Pedal Space Echo probably comes closest to emulating the warm tape-echo sound in a hardware pedal.

The Boss RE-20 is powered by 6 AA batteries. 36 hours of expected battery life under continuous use with Alkaline batteries.

Boss Twin
The big ones from BOSS. Parallel to the always beloved Boss compact pedals, the Boss Twin series has also made its mark. They offer an expanded range of features, easy operation, in some cases Memory functions and extra foot pedal functions.
more
less 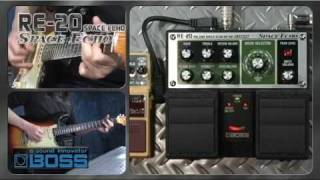