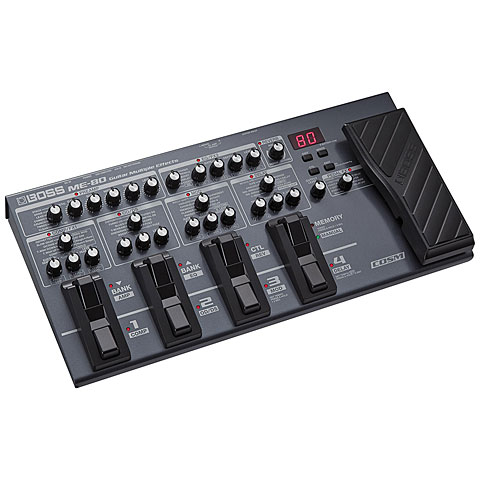 A world full of outstanding guitar sounds
The ME-80 is the perfect sound machine for guitarists, mobile, battery powered and equipped with a wide selection of the best BOSS amps and effects. The most intuitive operating concept with knobs makes it easy to adjust your own sounds in no time. It is possible to use effects as individual stompboxes or retrieve complex effects setups directly from memory. The unique new footswitch control options have doubled compared to previous footswitch designs for efficient and intuitive switching effects, patch selection and real-time sound design during playing. The free software BOSS TONE STUDIO opens up more sound options and provides a graphical interface for setting and organising sounds on the computer and a web connection to the website BOSS TONE CENTRAL for direct access to current sound patches which are created by professional guitarists, and much more.

Great choice of BOSS effects in one unit
Whatever your music style, creating individual sounds thanks to the wide range of effects in the ME-80 is a breeze. A cross section of BOSS effect history is integrated such as different distortion pedals over wah-wah, modulation effects, pitch shifter, delay, and more. The BOSS Multi Dimensional Processing (MDP) technology produces the unique space-filling ambient sound of Tera echoes and superior sound modulations of Overtone effect. The revised COSM preamps include new models such as "Crunch" and "Metal" as well as the AC preamp for use with electric-acoustic guitars. The built-in expression pedal can be used as a volume pedal and for controlling effects such as wah-wah, octave shift and Freeze and for influencing effect parameters as "Mod Rate", "Delay Oscillation" and other expressive sound formations are used.

The immediate success thanks to a permanently assigned controller
Unlike menu based multi-effect devices with complicated and non intuitive operation, the ME-80 is as easy to use as a single stomp. The effects are divided into eight logical categories, which can be active all the time. Seven of these categories include a variety of effect types and the associated controller for selecting the effect type and setting the parameters that are to be found in the single-pedal version of the effect. The pedal FX category has its own control to quickly assign the expression pedal a particular effect type or function.With this familiar and user-friendly operating concept you can immediately adjust the sounds you want and play, just like in the use of a large pedal board with many single-effect pedals. The great advantage over such a pedalboard is that you back up all current controller settings on one of the 36 user memories and can retrieve them directly via footswitch.

Einzelpedal- or multi-effects Power
The spontaneity of a single pedal control is perfect to set sounds directly. However, there are situations in which the switching of entire effect groups is more efficient, for example, if you need complex sound setups for different songs. The ME-80 supports both approaches and thus combines the best of both worlds. In Manual Mode, the effect categories function like individual stompboxes, direct regulator control and on / off switching via footswitch. In Memory Mode seven footswitches are automatically configured so that user or preset patches and patch banks are controlled, so you can get a complete multi-effects setups immediately. A footswitch of the ME-80 is intentionally designed to switch between the manual and the memory mode, so that a change to another mode at any time, even during a song, is possible.

New footswitch design for dual control capacity
The ME-80 features a particularly simple operation, with eight multifunction footswitches for switching on and off of effects, bank / patch selection, mode switching and the convenient access to alternative functions like Tap Tempo, Looper control and more , In addition, a special control function (CTL) is freely configurable, which when effects are grouped you can customize a particular parameter in real time. The new footswitch design features two footswitches on an area that was occupied on the previous comparable effect devices with one button. So BOSS could equip the ME-80 with numerous foot controls while maintaining the compactness and mobility of the device. In addition to the eight main footswitches the expression pedal is equipped with a switch to toggle FX function between the volume and the pedal.

Integrated USB Audio/MIDI interface
The USB port allows you to connect the ME-80 with your computer and use the professional sounds COSM preamp and effects directly with your recording software. It is also possible to output the effect sound of the ME-80, while an unprocessed signal is recorded on a track in the recording software; then you can use the USB loopback function to the effect-free track to "re-amp", that is, adjust the sound on the ME-80, while you hear the track, so as to achieve the perfect overall sound. The transfer of MIDI signals via USB is also supported, allowing you to select patches for the ME-80 from the computer to send and Expression Control Pedal data to your recording software and exchange patches on BOSS TONE STUDIO.

Edit and organize your sounds and just go online with BOSS TONE STUDIO
The freely available, via download BOSS TONE STUDIO software provides an attractive graphical user interface to adjust the effects of the ME-80 via USB from your Windows or Mac computer. The software makes it easy for you to store your patches, edit and organize as well as gigging, studio appointments etc. on the ME-80. BOSS TONE STUDIO also offers an integrated connection to the BOSS TONE CENTRAL website, where ready to play live patches, created by professional guitarist are available. These free patches provide a solid basis for creating your own patches with the wide range of FX options with the ME-80.
more
less

It's just what I wanted

This item was given an average rating of 4.8 out of 5 stars. 1 review has been written. The comments are not the opinion of Musik Produktiv, they are the subjective opinions of our customers. 17 ratings exist without a text or these reviews are written in another language.
more
less
incl. VAT, plus delivery costs
In stock
Available for immediate delivery
Add to basket
Add to wish list
10072652
Item number:
02/2014
Available since:
Boss
Brand:
ME-80
MPN:
04957054504656
GTIN:
› Print view
Share
Facebook
Twitter
Pinterest
E-Mail
Product Video 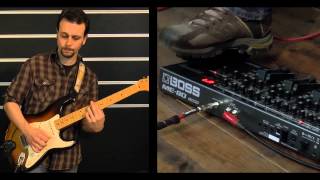