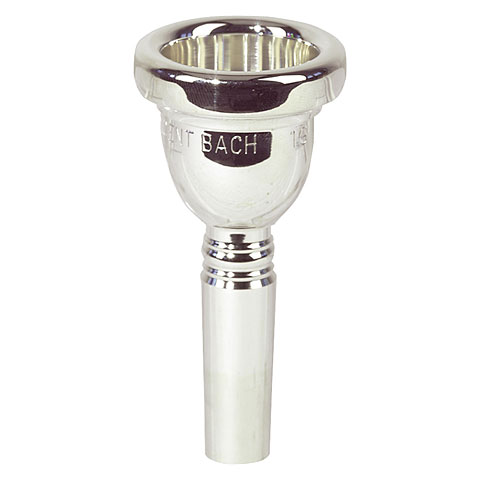 Description:
Genuine Vincent Bach mouthpieces are the best available in the world. Bach mouthpieces are designed to meet every conceivable playing need and have for nearly three quarters of a century. A Bach mouthpiece will make a poor instrument play well, a good instrument play better. Volume and excellent intonatoin; ease of response in the high and low register; rich, uniform timbre throughout the range; resistance calculated to increase the player's endurance - these characteristics explain why the best professional artists choose Bach.

Vincent Bach
The Vincent Bach Corporation was an American manufacturer of brass instruments and accessories, in this case primarily mouthpieces. After several takeovers, the current Vincent Bach brand emerged from this, which is owned by the Conn-Selmer, Inc. group of companies. Vincent Bach distributes a full range of all popular brass instruments. Further developments of original Bach designs are sold under the premium Bach Stradivarius brand.

Vincent Schrotenbach" was born in 1890 in Baden near Vienna in Austria. He first learned the violin, but later switched to the trumpet. At the beginning of World War I, he emigrated to the United States, where, after initial difficulties, he found employment first with the Boston Symphony Orchestra and later as first trumpet with the Metropolitan Opera Orchestra in New York. He decided to use the stage name Vincent Bach.

In 1918, Bach began producing mouthpieces for trumpets and cornets in a back room of the Selmer music store in New York, initially as individual pieces and in small batches. Later, he mass-produced mouthpieces with industrial precision and systematically researched correlations between the constructive design of mouthpieces on response, intonation, sound and general playing behavior. In addition, he developed a system for marking them, which other manufacturers still use as a model today.
more
less