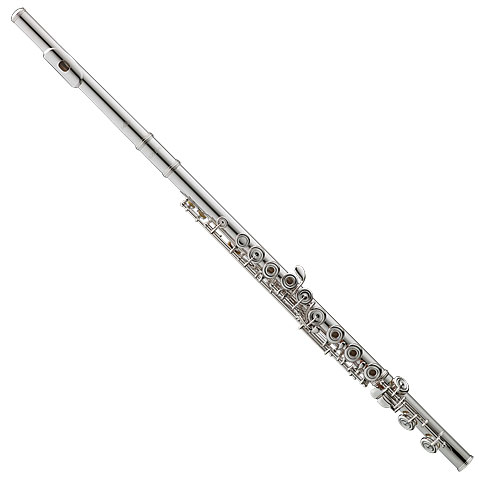 The Azumi S2RE offers a multifaceted and personal sound. The AZUMI flutes from the S series are recognisable by the oval shape of the Embouchure plate - the S-cut. The tone character of this series is supported by the use of 958 Britannia silver. The flutes from the S2 series have a 958 Britannia silver head piece with 925 sterling silver mouth plate and fireplace. This results in the particularly full sound of this flute.

The Azumi S2RE is equipped with ring flaps, which provide a greater sound and allows playing of quarter-tones.

Azumi S-Cut Series
Inspired by the colourful sound ideal of the Altus flutes, the instruments of the Azumi "S-Cut" series offerplayers an expressive and multi-faceted sound in combination with an excellent responsive. These new tonal possibilities and the professional design of the keywork with pointed valves, which provide increased stability, make the instruments of the Azumi "S-Cut" series ideal instruments for ambitious flutists with the highest demands on sound and design.