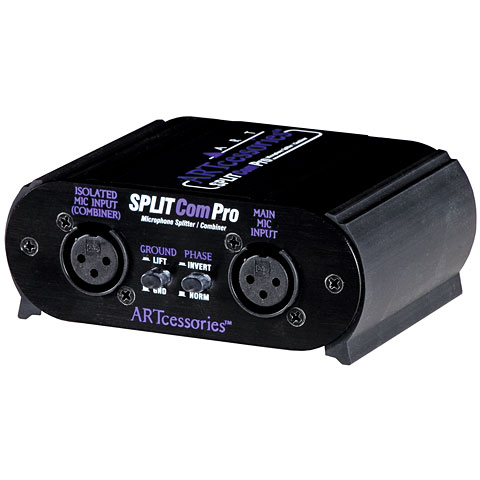 The ART SPLITCom Pro provides one direct-coupled output and one isolated output from a single microphone. Applications include sending the direct microphone output to the main mixer, and the second isolated output to a monitor or recording mixer. The MAIN MIC OUTPUT passes phantom power from the main mixer to the MAIN MIC INPUT for use with condenser microphones. Phantom power is blocked from passing to the ISOLATED MIC OUTPUT.

The PHASE switch inverts the polarity of the ISOLATED MIC INPUT. Applications include dual micing of percussion instruments, choirs, and instrument amplifiers. Phantom power passes through each output to their respective input, (MAIN to MAIN, ISOLATED to ISOLATED), however phantom power is blocked from passing between the MAIN and ISOLATED signal paths. Only the audio passes between the MAIN and ISOLATED signal paths (it is present on all inputs and outputs).

Find similar products:
· ART Audio Splitter
· Show all articles of the brand ART.
· PA Equipment
· PA Accessories
· PA Sets
· Loudspeakers
· Mixing Desks
· Powered Mixing Desks
· Power Amplifiers
· Effects / Signal Processors
· In Ear Monitoring
· MP3 Player
In order to give you a better user experience, we use cookies. By visiting, you agree to the use of cookies.