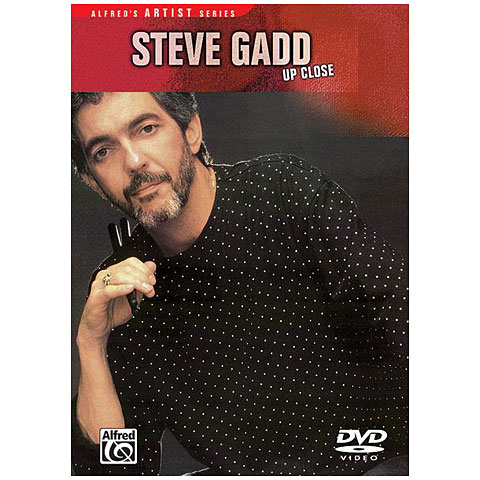 Up Close DVD from Steve Gadd
In English

Steve is the most recorded drummer of all time. In a career that spans more than three decades, Steve Gadd has earned a reputation as one of the most influential drummers of our time. His credits include recordings with Chick Corea, Paul Simon, Steely Dan, Paul McCartney, Frank Sinatra and Al Jarreau. On this DVD Steve discusses his influences, plays some incredible solos, and shows how he applies rudiments to the drum set, demonstrates his bass drum technique and more.
Opening
Steve plays a solo, which incorporates his bass drum in rudimental patterns on the drumset.
Applying Rudiments to the Drums
In answer to a question posed by Rob Wallis (Steve´s interviewer throughout the DVD), Steve explains how his drum corps experience helped improve his drumset performance. He then breaks down the patterns he played in his opening solo as he explains his application of the rudiments to the kit.

Bass Drum Technique
Steve explains his approach to bass drum pedal technique, which incorporates his heel on the downbeat and his toe on the upbeat.

Getting Started on Drums
In this chapter, we learn how Steve first became interested in playing the drums through his Uncle, who was a drummer. He also talks about his early days and the opportunities he had to jam with many musical greats, at the ripe "old" age of seven.

Influences
Art Blakey, Max Roach, Jack Franklin, Elvin Jones, and Tony Williams are among Steve´s major influences. He talks about Chick Corea and how he learned some of Tony Williams licks from Chick himself who, Steve says, has a "nice time feel" on the drums. This segment closes with Steve playing a groove that transitions into a solo.

Practicing
In this chapter, Steve shows us some of his favorites techniques for strengthening wrists and improving speed. He also explains how many of the things he practiced on the drumset are designed to improve his coordination and give him the ability to "free up" his hands from his feet.

Groove Demonstrations
Simulating what a record producer might request at a recording session, Steve plays a variety grooves starting with a basic groove and moving to more complicated, busier sounding grooves.

Playing in a Recording Session
Steve discusses his approach to record session playing and how he works with record producers on a session.

Chart Reading
In this chapter, Steve reveals his tips for approaching the initial sight-reading of a drum chart, along with his take on the importance of reading ability to drummers.

Four-Stick Drumming
Steve explains why he decided to play Paul Simon´s tune "Late in the Evening" with four sticks, as he breaks the pattern down and demonstrates it.

Samba
This chapter shows us some examples of Steve´s favorite Samba patterns, along with his approach to practicing the Samba.

Conclusion
The main section of the DVD concludes with Steve talking about a lesson he learned as he gained experience in drumming. He says he started out playing a lot of stuff on the drums only to realize that the ability to play "less" is even more important.

DVD Extras
This DVD not only has the usual options to Play All and Play Selected Chapters, it also has the following bonus features:

Adobe Acrobat files containing written examples of Steve´s approach to applying the Ratamacue and Six-Stroke Roll to the drumset, and a Drum Solo written by Steve. Both of these can be downloaded to your computer and saved or printed for practicing.
Bonus performances of Steve Gadd performing with a big band and in a duet with Grammy winning percussion Luis Conte. There´s also a performance by Virgil Donati.
Steve Gadd Catalog of his books and videos available on the Warner Bros. label.
Internet Link you can access when playing the DVD in a DVD-ROM drive on a computer.
Up Close: The Bottom Line
This 60 minute DVD not only gives us insight into the background of Steve Gadd, a true drumming legend, it also gives us a front row seat as he reveals some of the grooves and solo patterns he has made famous over the years.
more
less